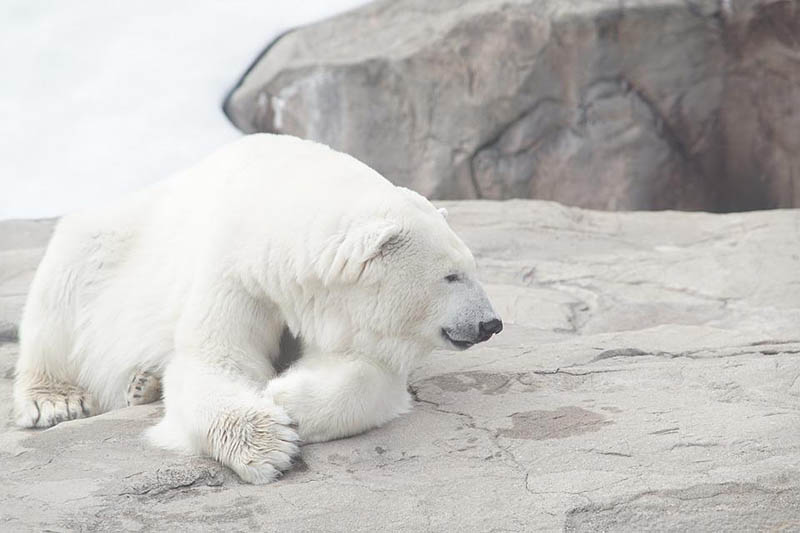 Polar bears are one of the largest terrestrial predators on Earth. However, these mighty beasts are on the verge of extinction due to global climate change. Their habitat is shrinking from year to year.

Size of the white bear

Adult polar bears can grow up to 10 feet (3 meters) and weigh up to 1 ton. They were considered the largest terrestrial predators on our planet for a long time, but then zoologists found out that saltwater crocodiles can be even larger. The weight of a newborn white bear cub is 1-2 pounds (450-800 grams) only!. This is 5-8 times less than the mass of a newborn human baby, although an adult polar bear is so much larger than an adult human.

According to scientists, there are from 20 to 25 thousand polar bears all over the world. Almost all of them live in the US, Canada, and Russia. Female specimens of these animals usually give birth to no more than 10-15 cubs within their lifetime. They bring offspring every 2-3 years and have 1-3 cubs, but the mortality rate among their cubs reaches 30%.

Why they are dangerous

These animals have no natural predators and know no fear of humans, making them extremely dangerous animals. They are at the very top of the food chain in their habitat. Also, they can sprint very fast, an adult white bear is able to reach speeds of up to 25 mph (40 km/h) over a short distance. A human just can’t outrun this beast.

If polar bears live in too warm conditions, (in a zoo, for example) their fur may turn green. This is due to the fact that in a climate not cold enough, algae begin to grow in it. By the way, algae also grow in the sloths’ fur.

Their skin is black

The skin of polar bears is black, but it is hidden under white fur. The only visually noticeable black part of their body is the nose. There’s a popular myth that polar bears cover their noses with their paws during hunting (to disguise themselves in the white surroundings), but this is not true.

These animals are picky eaters. While hunting, they are usually accompanied by arctic foxes keeping a distance. After catching prey, a white bear usually eats only the most high-calorie parts of it, that is, the skin and fat, and he eats regular meat only in case of severe hunger. Usually, the leftovers of the bear’s meal are eaten by arctic foxes.

They are super strong

An average polar bear can easily kill a human with one hit. Their muscles are strong, and, although the claws of the white bears are shorter than those of brown ones, they still be 3 inches (6.5-7.5 cm) long. They resemble cat claws in shape. These claws can hold even powerful and desperately resisting prey.

Polar bears can hibernate the same way brown bears do. However, usually, only pregnant females do this, sometimes they hibernate for 60-80 days. Males hibernate shorter and not every year. They usually do that in case of a lack of food supplies.

They can swim tirelessly for days!. The officially registered record of the swim, set with the help of a GPS beacon attached to the animal, was 425 miles (685 km). The female bear overcame this distance in 9 days, losing about 20% of her weight and her only cub. We don’t know why she decided to do this.

Polar bears sometimes swim up from below to drifting ice floes on which potential prey is seen and overturn them. That’s how they hunt seals having rest on drifting ice. By the way, they never eat penguins simply because the white bears live on the North pole, and penguins live only in the southern hemisphere.

Polar bears must be saved

There are only one species of white bear in the world, it is listed on the Red List of Threatened Species. Hunting of these animals is prohibited everywhere. Well, almost everywhere – it is allowed (but strictly limited) in Canada, theUS, and Greenland.

A polar bear’s hair is hollow and full of air inside. This helps the animal to keep its body temperature. Their fur is actually not white, it’s transparent with a hollow core that reflects light and allows ultraviolet light through.

Polar bears have an incredible sense of smell, which they use to track down seals, their favorite prey. In fact, their sense of smell is so good that they can sniff out prey up to 10 miles (16 km) away!

Although they are adapted to Arctic temperatures that can drop below -58°F (-50°C), they can overheat. Long summer days mean a lot of sunshine, so they have to conserve their energy with a body designed to survive in the cold. This becomes more dangerous when running and in summer when temperatures can reach 68°F (20 °C).

White bears are the marine mammals

Polar bears are also strong swimmers and can swim comfortably at about 6.5 mph (10 km/h). They use their large forelegs to propel themselves through the water, and their hind limbs to steer like a rudder. In fact, they are considered marine mammals due to the fact that water is their main habitat. Their Latin name, Ursus maritimus, actually means “sea bear”.

Their cubs are born in snow dens

Polar bear babies are called cubs. The cubs are born in snow dens made by their mothers. The mother burrows into the snowdrifts to create a safe and cozy place for childbirth. She will rest and warm up in the den during the harsh Arctic winters and wait for the birth of her cubs.

These animals have common ancestors with brown bears. Their evolutionary paths separated about 600 thousand years ago, but later, 100-120 thousand years ago, they met again in nature and began to interbreed with each other. Polar bears we know are the descendants of these hybrids.

Unlike brown bears, white ones hunt seals through the ice, and as the world’s ice melts, it’s more difficult for them to hunt. They can also hunt on dry land but this is not very natural to them, as they spend most of the time in the sea, swimming or resting on the floating ice.

They have a thick layer of fat, up to 4 inches (10 cm) or even more. The fat not only helps them to keep the heat but also can be used as a food reserve. An average polar bear can survive for 1.5-2.5 months without any food, using the fat accumulated in his body.